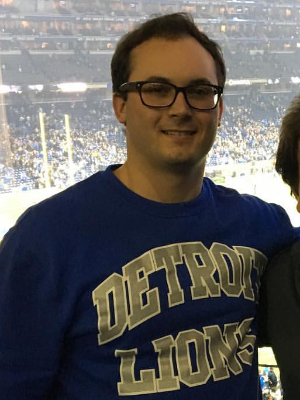 As some of you may know, Jeff has been slowly losing his vision over the past few years with first signs showing in his senior year at MSU (2015-2016). Throughout 2017 his vision continued to decline, but at a very tempered pace. He still had some ability to read text and navigate through outside environments alone with ease. It was in 2018 where his vision took a turn for the worse; he could no longer read without the use of text-to-speech services (Siri, etc.) and began his training to live as a blind person with the Michigan Bureau of Services for Blind Persons (BSBP). The BSBP provided him with a white cane to help him navigate and taught him several strategies of how to cope and adjust with the changes. He eventually went to stay at a training facility specifically for blind persons ran by the BSBP (February 2019) to accelerate his training and further prepare him to be able to continue to work at his job. When he returned (~May 2019), his behavior changes and memory issues became more apparent.

Up until this point, none of the several doctors working with him were entirely sure of the cause. There were several promising theories, but none of which quite aligned with Jeff’s symptoms and test results. He ultimately moved back home with his parents in Connecticut (~June 2019) where specialists in NYC were finally able to diagnose the cause of Jeff’s vision and memory loss. In December/January 2020, doctors were able to determine that there was excessive brain fluid build-up in his cranium and a tumor near his pituitary gland. Surgery was performed in February 2020 to drain the excess fluid and conduct a biopsy of the tumor. Results of the biopsy tests came back in March 2020 and revealed that his tumor is known as glioma of the hypothalamus and it cannot be removed due to the location. According to doctors at the time, the cancer became more aggressive during the 2 months leading up to the results of the biopsy.

We are going into our 5th year of the Hot Dog Challenge which we have been full supporters of The Leader Dog Foundation. However, with Jeff's health changing we have decided to add a foundation that will help support Jeff and other patients who are undergoing similar treatments and obstacles similar to Jeff. We ask if you can please donate to this cause whether its $1 or $100 we appreciate every penny donated.

I'm fundraising for the Other at NewYork-Presbyterian.